A startling information that appears in the newspaper Italian journalist Pietro Balzano said Juventus and Cristiano Ronaldo are in discussions with each other about the possibility of the two sides will split up after this season. Balzano said immediate negotiations and only the two sides have reached consensus whatever.

According to sources, the main reason of the two parties think about the possibility farewell because Juventus are stuck financially. Cristiano Ronaldo paid € 30 million / year at Juve and alone he led Juve salary fund significant stretch, season 2017/18 they still pay only 160 million euro / year and enjoys the highest player Gonzalo Higuaín and Paulo Dybala received more than 7 million euros / season.

2018/19 season was Ronaldo's first season with Juve and they have a loss of 40 million euros, and in summer 2019 they added two other high-paying players is MATHIJS De Ligt, high wage earners in Serie A after 2nd major Ronaldo, and Aaron Ramsey. Bloomberg analyzed previously that Juventus will always holes when Ronaldo payroll, and translation Covid-19 will increasingly serious situation.

They are expected to lose 70 million euros from ticket sales separate, shopping & services in the stadium when organizing games for the season 2019/20. 2020/21 season and even loss amount will amount to at least 150 million euros even if the "Old Lady" did not buy any players. And that, with UEFA financial rules and clear recent example of Manchester City, Juventus will mean for European banned.

Juventus can not accept the risk that they had decided to invite Ronaldo to negotiate, with the spirit of goodwill that they and Ronaldo will terminate the contract and allow CR7 is optional new club and not have to cut salaries his. If in the case of Ronaldo did not agree to accept the fact Juve and compliance with contracts and calculated to loans to survive.

The source of this rumor, journalists Balzano, is a rich source of reliability of the information related to AC Milan but in the past year have announced more accurate information about other clubs. Balzano was the first news about Antonio Conte Inter Milan and he is also the earliest, said Bruno Fernandes MU approached.

However Balzano also stressed this is just a rumor and have to wait dynamics of the parties to confirm. According to this journalist, if he left Juventus, the greatest likelihood he will return to Real Madrid, but Balzano said there is speculation of his own by even Real also unlikely to welcome Ronaldo back because they did not want financial risks. 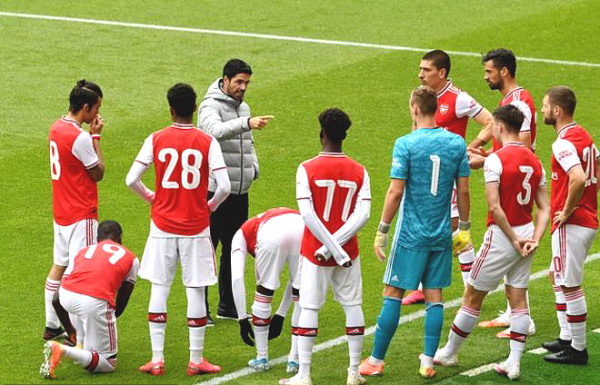 Coming back to play in the Premier League, Arsenal suddenly made fans fall into insecure after shock defeat in the Championship team below.